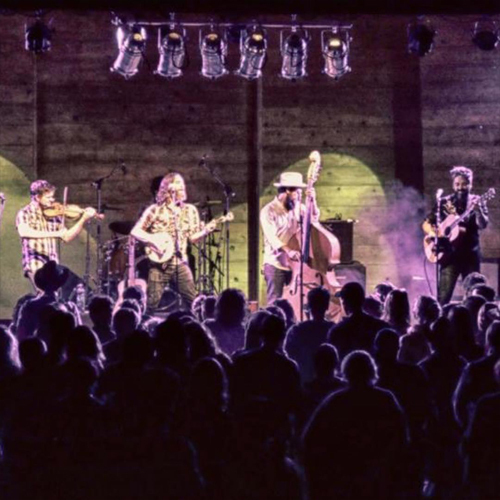 Rose’s Pawn Shop infuses their critically-acclaimed, high-energy Americana with passion, precision and poetry— forged in the sprawl of their hometown Los Angeles, interwoven with the strains and stories of life on the road. Their songs feature the folk-rock and bluegrass sounds of banjo, acoustic guitar, and fiddle, super-charged with electric guitar, thumping bass lines and driving percussion. This arsenal of sound is all held together by front-man Paul Givant’s songwriting which makes folk archetypes new and brings personal experiences to life with lyrics that are incisive, exuberant, whip-smart and heart-breaking. A devoted fanbase and critical praise has followed the evolution of the band from their first release, the rootsy, bluegrass-heavy  to the break-neck rock of  to 2014’s soulful  (produced by Ted Hutt after his success with Old Crow Medicine Show and the Dropkick Murphys).

With each release RPS delivers exuberant live shows, headlining venues across the US, UK, and Ireland, supporting some of their musical heroes— Lucinda Williams, Railroad Earth and Reckless Kelly among many others— and playing some of the country’s most acclaimed festivals including BottleRock Napa, Hardly Strictly Bluegrass, Wakarusa, Riot Fest Chicago, and FloydFest.

When their consistent touring schedule was interrupted by the pandemic, Paul and the band settled in from home for some serious songwriting and collaboration. After recording demos in separate spaces during quarantine, the band finally came together in the studio in 2021 to record their much-anticipated fourth studio album, slated for release in Summer 2022. As gigs and festivals finally return Rose’s Pawn Shop will be touring extensively in spring/summer 2022 to support the new album, with dates already announced for Alaska, the Pacific Northwest, Southwest, and at home in LA.