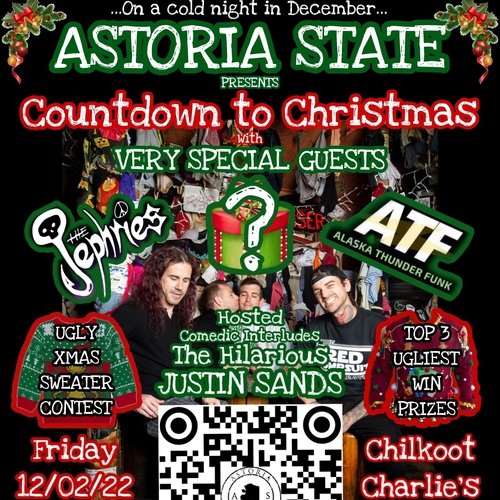 Nationally touring rockers Astoria State return to home to Alaska, this time with very special guests. The Jephries and Alaska Thunderfunk, will join Astoria State for the Countdown To Christmas Concert at Koot’s. You are not going to want to miss this amazing concert featuring some of Alaska’s premiere bands, AND COMEDY- That’s right! The Countdown to Christmas will be hosted by the hilarious Justin Sands, and will include comedy and contests during set changes. Get your tickets now to this MUST-SEE Anchorage music community event.

What more could you ask for? - How about an Ugly Sweater Contest? Top 3 ugly sweaters win prizes.

What better way to Countdown To Christmas?

PHOTO WITH THE BAND

Merchandise and other information about Astoria State can be found at www.AstoriaState.com

Astoria State is a nationally touring rock band featuring fellow Alaskan members Danny Resnick and Cameron Horst, and rounded out with Jesse Carroll and Jon Longley. Since their birth in 2020, Astoria State has gained quite a bit of momentum as they just wrapped up another national road trip this summer on the When We Were Emo tour with The Red Jumpsuit Apparatus, Attack Attack, and Kingdom Collapse. Since the release of their debut single “Nobody Knows”, the band is working up to their 100th show, in over 30 states. Astoria State has been featured on Spotify’s new noise, Apple Music’s Breaking Hard Rock, Pandora’s New Rock Now, American Songwriter, Broadway World, All Music Magazine, and many more national and international publications as well as locally in the Anchorage Press and Alaska Magazine. Astoria State made their first Alaskan concert appearance earlier this year at Koot’s in April when over 200 people showed up to rock out with the band. Don’t miss out on this one night only Anchorage local music event.